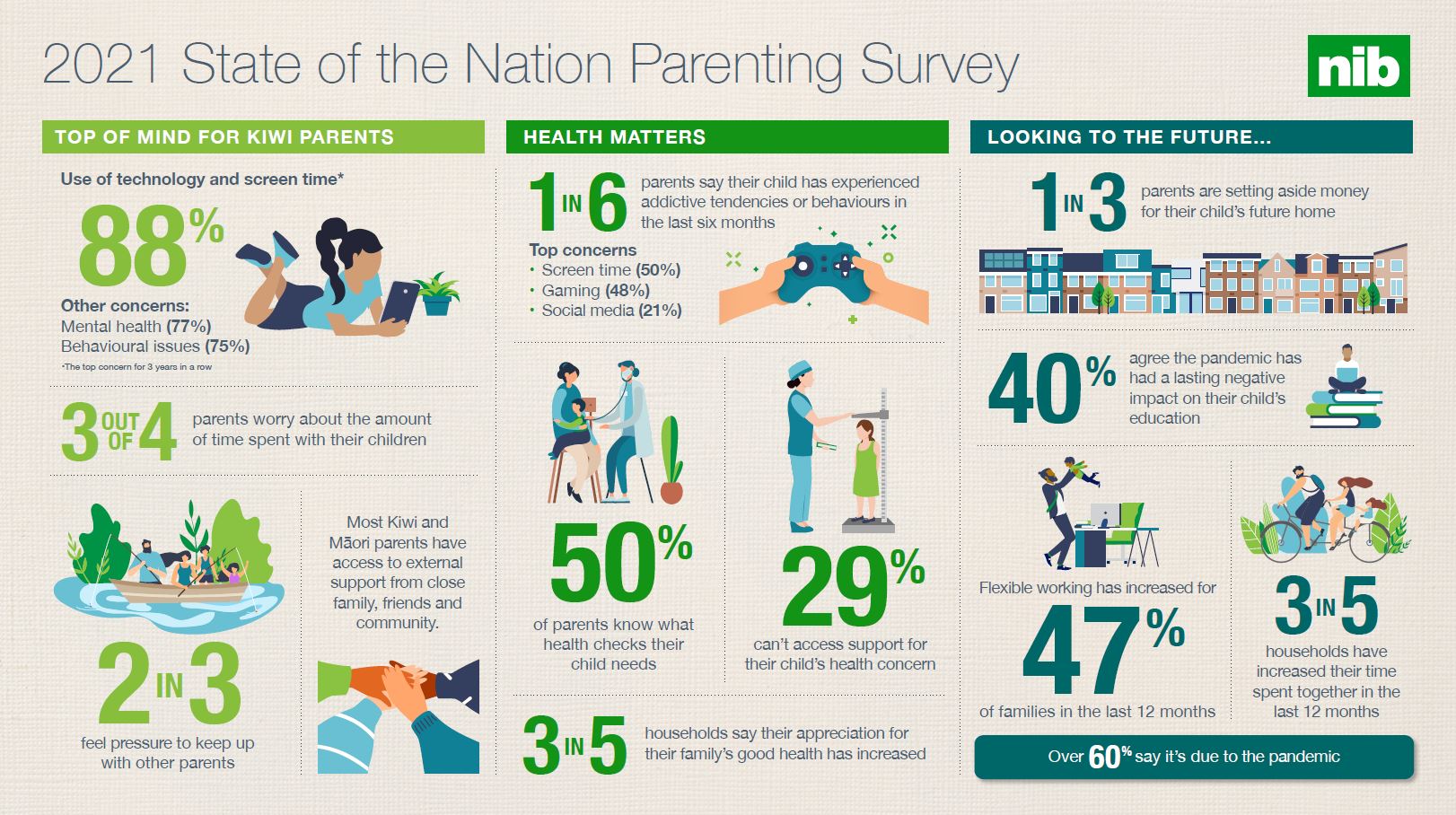 We've released the findings from our third annual nib State of the Nation Parenting Survey, revealing what concerns play on the minds of Kiwi parents the most, including some of the lasting impacts the pandemic has had on families.

The links between screen time and mental health

Use of technology and screen time ranked as the top parenting concern for the third year in a row (cited by 88%), followed by mental health and managing behavioural issues.

Concern around mental health has increased the most since nib’s 2019 inaugural survey, with 77% of Kiwi parents concerned, and one in seven extremely concerned. Likely exasperated by lockdowns, one in three parents also reported their children having difficulty regulating emotions, the most common issue experienced by Kiwi households in the last six months.

Alarmingly, one in six parents disclosed that their child had shown addictive tendencies and behaviours in the last six months. General screen time, social media and gaming came out as the top three addictive activities, naturally reinforcing parents’ concerns around their children’s device use. In addition, among parents with high school aged children, 63% believed their child couldn’t live without their devices.

nib parenting expert, Nathan Wallis said, “Our world is so centred around technology, it’s become a balancing act between recognising the benefits and being aware of the negative impacts. The literature suggests there’s a correlation between screen time and mental health risk, so it’s not surprising that the survey results showed an increase in both concerns.

“Managing device use has been even more difficult during changing alert levels, as many families have had to work, manage schooling and parent simultaneously from home, and are likely to have leaned on devices a little more than usual. But it’s encouraging that parents are concerned, as it means they’re aware. What I suggest parents implement, is a daily two-hour no screen time window, as this can significantly decrease poor mental health outcomes,” said Mr Wallis.

Positive shifts from the pandemic

For 57% of parents, appreciation for their family’s good health and time spent together increased in the last 12 months. Of those, more than half said both factors were a direct result of the pandemic, demonstrating some positive shifts for Kiwi families.

While many families struggled without access to daycare centres and schools during changing alert levels, more than half of respondents identified having close family to lean on, with friends (28%) and extended family (24%) also being common sources of support.

Noting the art of balancing work and parenting as the number one source of household stress (cited by 38%), many Kiwi companies can also be commended for contributing towards the almost half of working parents (47%) that experienced an increase in flexible working arrangements in the last 12 months.

nib New Zealand CEO, Rob Hennin said, “While nobody celebrates the disruption and distress caused by the COVID-19 pandemic, it has provided greater opportunity for companies to rethink traditional work practices and explore what work, family and life really looks like to our people.

“One aspect of this has been ensuring parents feel supported in the workplace to put their whānau first. At nib, we encourage flexibility around when and where our people work, so they can make time for key moments like their child’s doctor’s appointment, home-schooling during the pandemic or their afternoon sporting activities. We support this by providing our employees with an annual NZ$1,260 work from home allowance, in recognition of the ongoing costs of remote work as well as free access to online GP consultations in partnership with Tend,” Mr Hennin added.

As the topic of health and vaccinations continue to dominate headlines, the survey uncovered it’s an area where parents require more support. Over one in three parents prioritise their child’s health over their own (especially when it came to lower income and single parent households) suggesting that many are faced with making a choice between addressing their own health issues or their child’s.

“With 71% of children having experienced at least one negative mental, physical or behavioural issue in the last six months, we need to ensure Kiwi parents are feeling supported to deal with the health and wellbeing needs of their whānau,” Mr Hennin said.

“We aim to address some of the barriers faced by families when accessing health information through our various initiatives – such as our partnership with Nathan Wallis, providing free resources to help families through life, as well as wellness programmes which deliver plans to help improve health outcomes for our members.”

“We hope these annual insights spark conversations around parenting and health and encourage all generations to be more proactive when looking after their health and wellbeing,” Mr Hennin said.

We partnered with One Picture to deliver the nib State of the Nation Parenting Survey, which surveyed a representative sample of 1,200 respondents from around the country.