Battle for the front seat giving you a headache? Tips & tricks to combat sibling rivalry 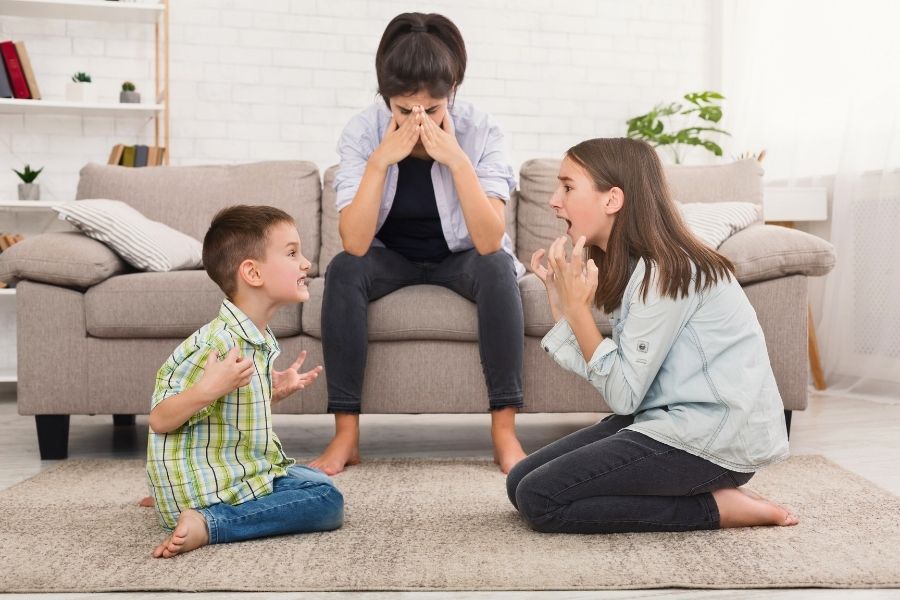 Sibling rivalry is a fact of life for any family with more than one child. And while a bit of competition can be healthy for kids (it’s a great motivator) as a parent or guardian, the challenge of managing this conflict, and the stress associated with it, can feel relentless.

If you’ve ever wondered what causes sibling rivalry, or what on earth you can do about it as a parent, we sat down with nib’s resident parenting expert, Nathan Wallis to get his answers to your biggest questions.

Why does sibling rivalry occur?

More often than not, sibling rivalry occurs as a result of children competing for the same person’s attention (usually mum or dad’s).

Although it can happen at any age, the research tells us that we’re likely to see the greatest level of conflict between siblings with a two-year age gap. That’s because, developmentally, they’re not close enough in age to operate like twins (which we often see with anything less than an 18-month age gap), but not far enough apart that there’s a clear distinction between the domain of the older and younger sibling – which usually happens with gaps upwards of two and a half years.

When kids are two years apart, everything becomes a competition, from who gets the front seat, to who gets to give mum or dad the first hug when they come home from work. And if those siblings are of the opposite sex, that’s likely to ramp up even further.

What can parents do to manage sibling rivalry?

The best thing parents can do to foster positive relationships between their children, is to start early. When welcoming a new baby to the family, many often worry that older children will start to feel they’re missing out on attention – and to counteract that, will dedicate extra one-on-one time to the older sibling once the baby’s gone down for a nap.

Despite the best of intentions, this actually serves to teach the older sibling that life’s better (and a lot more fun) when the baby’s not around, fostering sibling rivalry in the process.

Instead, it’s important to create opportunities for one-on-one time with the baby nearby. That means (once the baby’s needs have been tended to) sitting down with your older child to play blocks, or do their favourite puzzle, with the baby in your arms – then, when it comes to baby’s nap time, encourage your older child to play on their own while mum or dad has a rest. Not only does this give parents some important down time, but it sets older children up to want the baby around, because that’s when mum and dad are more likely to play.

Giving children the skills to manage their own conflict

When dealing with sibling rivalry in older children, the most important thing to remember is not to assume the role of judge and jury – getting into right and wrong, or who’s to blame. Unless you’ve watched it happen, it’s impossible to know the full truth of the situation, and kids often aren’t afraid to bend the truth if it means getting their way.

Instead, offer strategies to help them resolve the issue themselves. If kids are fighting over the TV, for example, suggest they try having 20 minutes each with the remote, working out when to switch with the clock on the wall. This technique is called cognitive training and focuses on offering positive examples for children to follow, which makes it much easier for children to understand the behaviour you expect of them, than when they’re being told off or told what not to do.

Establishing agreed days when each sibling will have first choice or first dibs is another simple strategy to help manage any rivalry – such as alternating odd or even dates, or certain days of the week. Focusing on building communication skills is another effective tactic, as equipping children with the ability to express themselves will mean less chance of conflict overall.

Sometimes balancing the time you spend with each of your children can feel like a challenge. If you have to take one child to sports several times a week, for example, there’s a chance their siblings may perceive that as one-on-one time – and it’s natural they’ll want you to carve out time for them as well. In these instances, it’s about simply keeping track of how much time you’re spending with each child and looking at how to make that as equitable as possible.

For parents of special needs children, though, the care and attention they require means it’s often not possible to dedicate the same amount of time to their siblings. In these instances, effective and age-appropriate communication with your other children is vitally important. Help them to understand why it’s happening (i.e. “because your brother needs help with toileting and walking”) while emphasising that it’s not about loving or valuing their sibling more, it’s just about meeting their different needs.

Beyond that, focus on spending high-quality time with those siblings – such as by facilitating weekly 10-minute Mate Dates, where children are given the chance to call the shots for a set amount of time each week. This means letting them choose the activity, or the topic of conversation, and encouraging them to express themselves in ways they wouldn’t normally feel able to in a parent / child relationship – without the fear of getting into trouble.

When done well, the Mate Date format will give you access to the same amount of information in 10-minutes that it would typically take hours to pick up incidentally. As long as the right boundaries are established, Mate Dates can be an incredibly effective and powerful tool to create high-quality relationships with children, even for the most time-poor of parents.

Nathan Wallis is a Neuroscience Educator, nib health insurance parenting expert and regular media commentator. He hosts sold-out learning events for parents up and down the country (and abroad), talking to different stages of child development – including the first 1000 days - and how parents can support their children in order to achieve the best possible outcomes.